We’ve all been there. Staring at the beer selection and having no idea what to buy. Not only do you not know what you’re in the mood for, but also you’re not even sure what the difference is. How about a quick, crash course in beer? And then you can come to us with all of your specific questions.

Let’s start at the beginning. The ingredients. There are four main ingredients in beer—water, barley, hops and yeast. Beer is more than 90 percent water, so that one is easy. Barley—think of the barley as you would the grape in wine—determines the beer’s color and sweetness. Then the hops balances out the sweetness of the barley and gives the beer its aroma. And the yeast is responsible for converting the fermentable sugars into alcohol. Obviously the process is a little more complicated, but you get the picture. 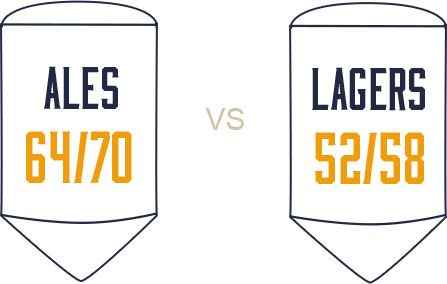 So then you get to decide between the ales and the lagers. There are really only two kinds of beer—ale and lager—but then many different styles within those two categories. So what’s the difference? The yeast stain and the temperature of which the ferment. Ale yeast typically ferment between 64 and 70 degrees while lager yeast ferment between 52 and 58 degrees. With ales, the warmer fermentation generally produces a complex, fruity flavor. And the colder fermentation process produces the crisp, clean flavors of the lager. That’s a very simple explanation, but you get the picture.

From there, you get to pick from a huge variety of styles that range in bitterness (IBU) and color (SRM). Beers such as the wheat ales and the Belgian whites are very light in color while bocks, porters and stouts are dark. As you sample more and more beers, you’ll probably start to learn which colors and flavors you enjoy most.